A couple of days ago I found this One Word: 365 concept (see previous post).  After much thought I decided on the word... 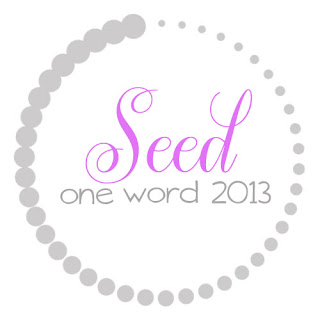 In November I attended the annual TAGT conference in Dallas, Texas.  I attended a session presented by Dr. Patricia Gatto-Walden, Meaning Through Service. Lots of great information shared, many comments that made me think. One in particular, "Weed Garden or Seed Garden," really made me think about the obstacles in my life that hold me back.  Her analogy (in my paraphrased notes), when we find the weeds in our garden, we pick it out and throw it away, but the weeds grow back.  To keep the weeds from coming back over and over, the gardener has to plant a seed, and the seed will grow and strangle out the weeds.  She continued, our mind is much the same, when we have a negative thought, we don't really think about it... but slowly that "weed" takes root and begins to grow - it affects our emotions, our bodies (pain, depression, fatigue) and eventually takes over.  We have to "weed" our gardens! Get rid of the negative thoughts... but like the weed in the garden, it doesn't go away, it comes back and back.  We have to plant "seeds (positive thoughts/affirmations) in order to strangle the "weeds" from our garden.

As Dr. Gatto-Walden said in her presentation:

If you want to change your life, you need to weed your garden. You have to plant an affirmation that's truth (seed) to kill out the weed.  A SEED of awareness!! Turn the "trash" to "fertilizer.
Posted by Yesteach at 7:03 PM No comments:

The basic concept: rather than all the resolutions (which we all break) you just choose One Word that and focus on that word for the next year.  Reading through the comments on the website, there is a huge variety of words. There are what I would think of as typical words to focus on daily: truth, love, challenge, persevere, heart.  But then, I've also come across some that I thought were a bit more intriguing.

Release - I'd have never thought of this word, but it really spoke to me when I read it.  Letting go is so hard, whether it be letting go of a loved one, or letting go of something we can change.  I liked the idea of "release" as a word.  To just resolve to release all those things you have no control over, to finally let them go.  I like Release.

Inconvenience - I came across this one in a tweet, and it made me think.  Inconvenience is something that we all complain about.  Being put out by someone, having to wait, going out of our way.  But often these little inconveniences offer great reward, they teach us patience, they help us to give of ourselves when maybe we would have chosen a different path. I like Inconvenience.

Jump - I really liked this word! I think too often when opportunity comes along we hesitate.  Insecurity, doubt, fear - whatever the reason - and I just thought, when I saw this word, how my life might have been different if I'd just had the self-confidence to jump in and do things, even when I was afraid of failing. I don't like failing, I don't like disappointing others, I have this need to please everyone all the time, and jumping doesn't always do that... when you jump in, you mess up, you forget details, you disappoint.  But, you also never miss an opportunity.  I think this would have been a great word for my cousin, Brett.  Brett was the most likable person you ever met, but he was always getting "into trouble."  The thing about Brett though, was that no matter what trouble came along, he always bounced right back, and started over... and usually got in trouble again.  But he always lived life to the fullest.  He never missed an opportunity when it came along. He never did anything half-way. He lived every second of every day of his life.  He jumped.

Deeper - Deeper spoke to me because I think we have become a very shallow society.  I look at the world around me today and all the "things" we have.  People are judged/valued based on their "things." What shoes do you wear, what car do you drive, what mobile phone to you carry.  I feel we have stopped looking at who the person truly is, and only see them for what they have... and there are so many people who base their own value on "things."  Bigger houses, better cars, higher paying jobs. We need to start going deeper, past the surface, in many ways.

So, what is my word?  I don't know. I just happened upon this today, and I think I need to think about my word.  If you're interested, check out the website or search Twitter for #oneword365.

Posted by Yesteach at 7:21 AM No comments:

I came across this great poem today written by The Real Mr. Fitz.  I've read it several times today, and every time I read it I get teary eyed at the end.  I know exactly how Mr. Fitz feels! For the past few years I have become more and more frustrated at the lack of creativity and individuality that is allowed in teaching.

I remember when I was applauded for thinking outside the box, for challenging my students to rise to a higher level, for meeting the needs of the individuals in my classroom, and not expecting every child to be on the same page on the same day.   My lessons were unique, they were me.

That is no longer the case.  Today, the standardization of lessons has taken some schools to the point of literally every teacher teaching the same way, on the same day, in the same way.  I recently saw a teachers' guide that not only specified WHAT to teach, but how much time to spend on each thing, as if every child will learn at the same pace.  When I questioned it, the response I got was that many teachers don't know how to pace their lessons, and this will help them do it.  I'm pretty sure that pacing is one of the criteria on my yearly appraisal - these folks should be set, as their pacing is scheduled for them!

I've been asked for critical thinking questions for curriculum topics, because teachers don't know how to ask these kinds of questions.

I've been asked not to share all the resources I find, as it can become overwhelming for the teachers to know which ones to use, and besides we have trainers and teams planning what they need.

So when I came across this poem today, it just sort of hit me.  This is what education has become, a rote regurgitation of the information to pass the test.  There is no thinking, there is no creativity, there is no imagination, there is no individuality... and I just can't accept that.  I can not allow the children whose lives I touch to be herded through the school system, moving from assessment to assessment, and losing that quest for knowledge that every child enters school with.  I will not give in to the standard.  I will make the stand to teach, to lead, to inspire, to guide my students, for the short time I have them, to become learners, not cattle.

My first experience with ListServs came in the early 90's, about the same time I discovered the Internet.  I was just in awe of this amazing resource that offered me contact with teachers all over the state - to share ideas, to pass along resources, to ask questions when I was stumped.  It was great! Sure I had teachers at my school, but now I had, at the drop of an email, hundreds more.  And the best way to connect with these teachers? The ListServ!

For those of you too young to remember the ListServ, it's basically a giant email group.  You email the List, and then the List mails out to everyone else.  Instant contact!  Today, 20 years later, I still receive emails from ListServs, and I have slowly, in the past few years, just stopped bothering to read them all.  It just seems so time consuming logging in to my various email accounts and reading all those emails.  Also, the only people on my ListServs are people who have also sought out and found them, and then get approved to join the list - limited audience.

Then in November 2008, I heard about this new website, Twitter, where you could quickly share with friends. I thought of it as a text message that goes to everyone all at the same time.  Hmmm.. looks interesting.  So in 2008, I sent two tweets; in 2009, I sent one! Not seeing a purpose here, who cares where I am and what I'm doing?

In 2010, I found a use for Twitter - DonorsChoose! I could tweet out my projects, and hopefully someone would see it and donate! I sent 27 that year.  OK, so I'm tweeting, but who sees it?  I truly didn't see a purpose for this at all, until...

TAGT conference, December 2011, Twitter Chat! I'd heard of Twitter Chat, I was actually on a ListServe that had members who participated in a Twitter chat.  This sounded like something that might be fun, and I have a Twitter account, what the heck.  In a matter of hours, I was addicted!  I discovered the power of the hashtag, or as my friend refers to it, "that pound sign."

Now, less than a year later, I have gone from approximately 30 tweets, to close to 200 - no where near some of the folks I follow, but way better than before.  I have almost completely stopped checking my emails that were dedicated to ListServs.  Now, I tweet, I follow others and have their tweets come to my phone as text messages.  Last week at a conference I tweeted out an idea I'd gotten in a training about using QR codes, and in less than a minute, I had a reply from another teacher with a website listing dozens of uses for QR codes in the classroom, and since he had used the hashtag for the conference I was at, not only did I get it, but over 1000 conference attendees did as well!

The people I follow on twitter cover every state and at least three continents.  My hundreds of teachers on the ListServe (by permission only), just jumped to millions with a hashtag! No permission, no application, no filtering.. just a common hashtag, and we're all connected.

My goal, to convert at least one teacher each month to Twitter, to extend the network, AND to contribute tweets of information I find or create, and be a producer, not just a follower.

I have started at least three blogs in the past five years (I'd even forgotten this one existed until I tried to use the address.. :-/)

That said, I have committed myself to blog, at least for the rest of the school year... and not only blog, but maintain THREE of them (when I commit, I commit big!).  The first one, I created last year to maintain online communication between school and home.  From that, I added a second one to chronicle our gardening experience.  And now this one, which originally started as me blogging my experience in an Intel for teachers class (in 2008!), and had ONE post... time to dump that and restart.  So here I am, and my goal for this blog is at least once per month, and hopefully more, but no less!

I always feel like I have nothing important to say, but then I read other blogs and think, "I can do that!" So, on that note... here we go!
Posted by Yesteach at 5:53 PM No comments: